The best base in the Far East !

I've been teaching English as a foreign language in Sang-Ju South Korea for close to two years now and we've been having a great time and not only here but also in the neighbouring countries ( if you like check out my old blog www.bottledmessages.canalblog.com ) 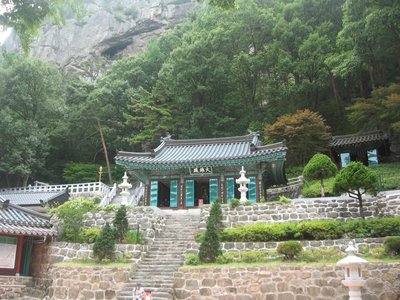 Sang-Ju is a relatively quiet town with beautiful scenery (tree-covered low mountains, Nakdonggong river, lush green rice fields a beautiful little Buddhist Temple called Namjansa and some good restaurants). It's a great place to save because there's nothing to lure you into a shopping spree which might be the case in Seoul or any other big city in SK. 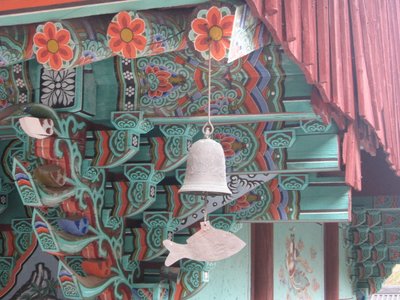 Our next base in SK will be on Jeju island where I've got a teaching position commencing on the 27th August. I'll be teaching at Seogwipo which is where I wanted to be based so the excitement of adventure continues ... ! Watch this space ! 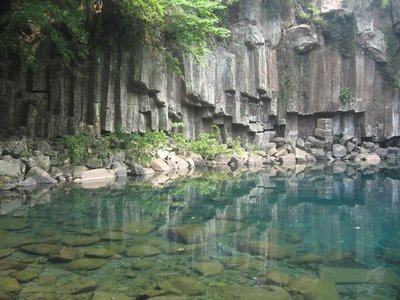 We did want to go to Malaysia or South East Asia but all the teaching positions there paled in comparison to the benefits to be had here in South Korea. For all those who'd like to save and travel SK is the place to be or Taiwan - the only drawback with Taiwan is that from what I've gathered they exercise a not so fair practice of only accepting North Americans (well the public schools do not the private ones but the former offer the best benefits!) so I've chosen to stay another year in SK but this time on the subtropical island of Jeju, Korea's 'Hawaii' it's known as. 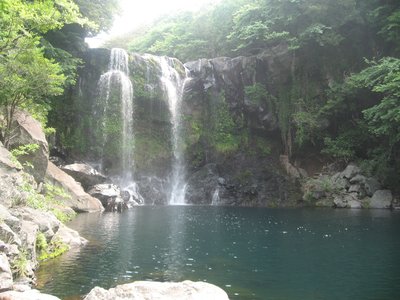 What's great about Seogwipo on the island is that there's a dive school there run by an English-speaking Austrian called Ralf Deutsch (Big Blue 33) and I love diving so I'm tickled pink that I've got a position there! Apparently, the marine life is a mixture of the Red Sea and the Baltic Sea and it has soft corals and kelp forests in the late autumn winter season and you can dive all round yes! Yes! Yes ! 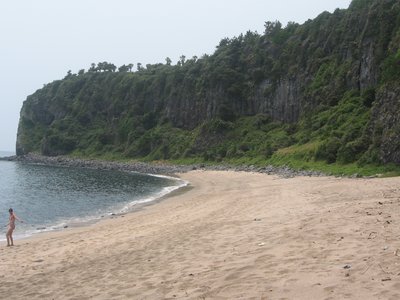 Our feet are so itchy at present that we've already booked a two week trip to Thailand in February 2010. We'll be exploring Chiang Mai, meeting the hill tribes on the Burmese border, cruising on the Mekong River and diving off of the island of Ko Chang so we can't wait for that !

In the meantime a friend of ours is visiting SK so we have the pleasure of being her guide and having thus an excuse to return the places we've enjoyed and explored in SK. 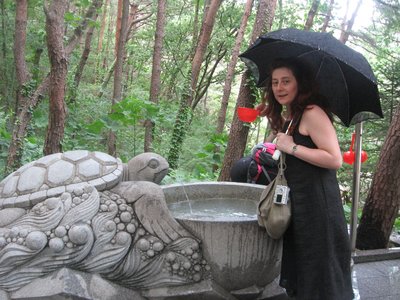 we're now exploring the heart of Korea which has been our stomping ground for the last two years ! 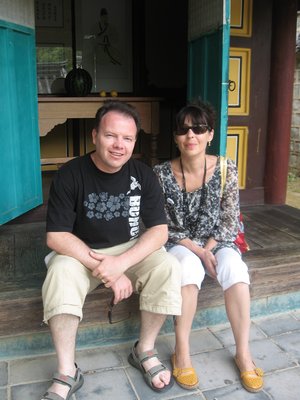 Me and Barbara at Geumo Mountain Temple, Gumi

Near to Sang-Ju is Gumi and right next to Gumi is Geumosan (Geumo mountain). After feasting on some Japanese Teriyki in the city centre we took the cable car up to the top of Geumosan. We hiked for about half an hour at is peak enjoying the unusual bird song; I swear I heard the cries of an eagle and the views of lush green deciduous forest and evergreen, the Buddhist temple and a Buddhist cave that has been a site of pilgrimage since as early as the fifteenth century A.D. 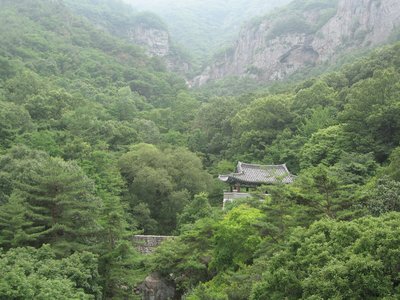 Next on the agenda is work for me damn it but my wife and Manou will be going to one of our favourite temples in SK nown as Namjansa in Sang-Ju and then for a Korean style public bath. In short they'll strip and bathe with lots of naked Koreans. The feeling afterwards is of course magical. Your whole body is totally relaxed !

Next Friday however we'll be going to Jeju-do fo a long weekend. If all goes well I'll be doing a day's diving there too
which'll be my first dive in SK, can't wait !